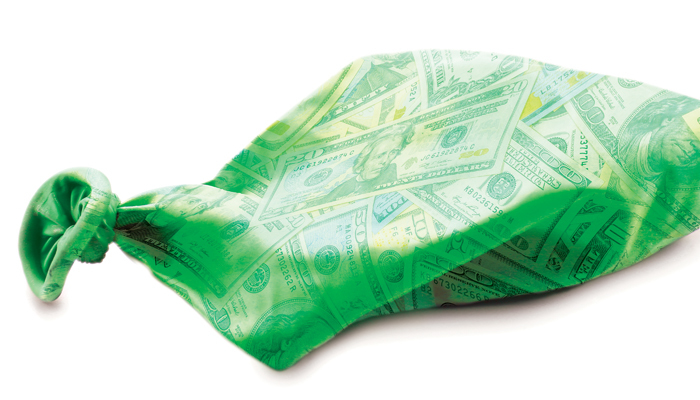 What is deflation? An economic phenomenon that is rarely seen, deflation is a continuous drop in prices over time. What causes deflation? The cause is anything that reduces spendable income and consequently contributes to reduced demand on a massive scale.

There are numerous examples of causes. For instance, student loan debt keeps young people from buying houses and filling them with furniture. Tax increases divert income. Cultural lethargy, such as in southern Europe, retards wealth creation. Investment income is minimized by low interest rates. Anything that increases unemployment or suppresses wage growth reduces income, such as new technologies in the workplace.

If you’re wondering whether deflation is becoming a reality in today’s world, you only need to determine how many of the foregoing examples of causes are currently in play. I suggest that all of them are.

Are we therefore experiencing a continuous drop in prices? The world is well on its way. Except in failed petro states such as Venezuela and Russia, inflation is AWOL. A multitude of areas in the world are experiencing deflation or disinflation – decelerating inflation rate and the road that connects inflation to deflation.

Here are a few specifics: In the final quarter of 2014, UK inflation was just 0.6 percent, French deflation fell to -0.2 percent and, according to the Wall Street Journal, seven European Union countries, including Spain, Greece and Cyprus, were seeing deflation at a rate of -1.0 percent or higher. Economic powerhouse Germany joined the deflation club in January 2015, with prices at -0.5 percent year-on-year. Incredibly, given the relative strength of the U.S. economy, the Minneapolis Fed cites a recent market analysis that puts the probability of less than 1 percent inflation (disinflation) in 2015 at 72 percent and the probability of deflation in 2015 at 29 percent. The U.S. did experience disinflation in the second half of 2014.

When spendable income decreases and demand declines, prices fall. When prices drop widely, consumers have a strong incentive to put off discretionary purchases, because goods will likely be less expensive in the near future. Deferred purchases causes demand to decline further, businesses put off investments, public debt balloons, and a self-reinforcing downward spiral ensues. A deflationary cycle is very difficult to break, and the specter of full-blown deflation scares the daylights out of central bankers.

Another consequence of deflation is falling wages and revenues. From a consumer standpoint, you might think that falling wages aren’t troublesome. After all, prices are falling as well. However, what about the home mortgage and the car loan? Those payments are substantial and they aren’t decreasing. Most people are up to their eyes in debt and suddenly it’s over their head. The ultimate individual negative consequence is unemployment, as businesses hunker down.

While lower oil prices do not equate to lower prices of goods per se, they indirectly foster deflation by causing massive layoffs of highly paid workers in the oil drilling and oil services sector. In January, the first sizeable round of cuts occurred, with three of the sector’s largest companies downsizing by 17,000 jobs. The negative ripple effect extends to pipe manufacturers like U.S. Steel and machinery makers such as Caterpillar.

Deflation can occur with or without an assist from cheaper oil, and be assured that deflation will deliver considerable downside to heating oil retailers. For starters, when consumers are under financial pressure, they cut back on heat as much as possible, they seek less expensive sources of heat, and they are slow to pay or ignore their bills altogether. As mentioned a couple of paragraphs ago, heating oil dealers will experience falling revenue, but their loan debts won’t decrease, making these obligations more burdensome.

If deflation and the negative economic consequences associated with it persist for a lengthy period of time, as they likely will, falling demand will make it more difficult for the oil markets to rebalance supply and demand. This will cause unrealistically low oil prices to persist, curtailing revenue needed to develop new oil wells. Eventually, depletion of existing wells will cause supply to overcorrect relative to demand, leading to supply shortage and dramatically higher oil prices. That is a big problem in deflationary times.

Central bankers around the world are well aware of the threats posed by deflation, and they are resolute in their determination to avoid its grasp. One of their most prized tactics is weakening their country’s currency. For example, recently the European Central Bank announced that they are implementing quantitative easing, which increases liquidity in the Euro Zone and consequently devalues the Euro currency versus other world currencies, including the U.S. Dollar. This tactic makes imports more expensive, which is inflationary and an offset to deflation. It also makes exports less expensive and ought to increase demand for Euro Zone goods, thus stimulating European Union economies and thwarting deflation.

While devaluing the Euro is good for the EU, it’s not so good for their trading partners, such as the United States. In our country, cheaper imported European goods are a threat to sales of domestic products, and more expensive U.S. exports are less competitive in European markets, neither of which is good for our economy. Obviously, there is a limit to how much one country (or union) can benefit its economy at the expense of other economies. Overzealous devaluation is the sort of endeavor that can bring on currency wars.

A healthier approach to stimulating economic activity and avoiding deflation, without adversely impacting other countries, is to seek out internal solutions, such as creative ways to reduce tax and debt burdens on individuals and tax and regulatory loads on businesses. Laborsaving workplace technologies and adverse demographics (primarily a huge number of baby boomers who are exiting their peak spending years) make the task more difficult, but failure is not an option. Deflation is simply too debilitating.