Overt Signs Suggest That China Is Faltering 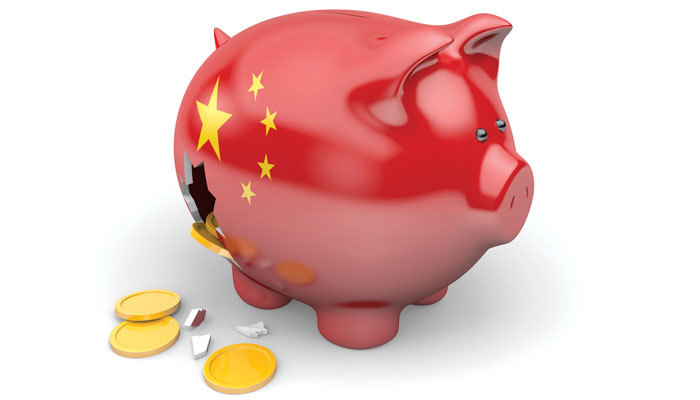 It is generally acknowledged that the two biggest contributors to the current plunge in oil prices are oversupply and flagging demand in China. For this reason, the situation in China warrants further examination. China’s economic wellbeing, or lack thereof, has long been difficult to discern. Chinese economic data is consistently opaque and hard to verify.

Here is an example of the skepticism this encourages. According to Reuters, in July China’s National Bureau of Statistics reported that “China’s economy grew by a steady 7.0 percent in the first two quarters of the year, spot on its official 2015 target.” This “statistical stability comes at a time when prices of global commodities … have cratered,” in large part because of weaker Chinese demand. Isn’t lower demand for raw materials a sign of a flagging economy?

This sort of inconsistency has, per Reuters, lead Fathom Consulting, an independent research firm, to suggest that “the numbers are fantasy.” Based on China’s electricity consumption, rail cargo volume and bank lending, Fathom “reckons growth will be 2.8 percent this year, slowing to just 1.0 percent next year.” Critics may have questioned Fathom’s methodology and conclusions, but based on recent events, the critics are likely less vocal, as a stock market crash and currency devaluation are not indicative of an economy on firm footing, manifesting robust demand and moving forward on 7.0 cruise control.

Credibility Goes Out the Window

The Chinese stock markets soared until four months ago, much of it due to the government encouraging retail investors to join the equities party. In mid-June, the bubble burst and, as phrased by foreignpolicy.com, the government employed “mind-boggling interventions to stem the rout.” Beijing’s actions included asset freezing, “asset seizure, insider trading and rampant leveraging,” As a result, “the Chinese capital market no longer has any credibility because every rule, even a fundamental rule like property rights, can be violated in the name of stability.”

There are other consequences of the collapse and subsequent government intervention. The state-controlled banking system is reluctant to provide working and investment capital to private sector companies, so the equities market was a sorely needed non-debt funding channel for these firms. Not so much any more.

Per the New York Times, “Ordinary investors have poured money into the markets over the last year, and many are now sitting on losses. The overall result is that consumers are spending less,” a negative for the economy. Bloomberg reports that this debacle “will definitely leave a bad taste in investors’ mouths. Some institutional investors may be unwilling to [re]-enter the market for the long term.” Again, this reduces availability of non-debt capital.

Perhaps the most damaging consequence is market-related business losses. S&P points out that “Chinese securities firms and possibly other types of non-bank financial institutions that may have sizeable equity exposures” are at risk. Business Insider warns that, “Corporate working capital loans that banks lent out … may have been invested in the stock market. Now that the stock market is crashing, those loans are under intense pressure.” This debunks the widely circulated suggestion that the stock market is not connected to China’s real economy.

The subsequent unexpected 3.5 percent devaluation, largest in more than two decades, occurred over two days in mid-August, and it rocked the commodity, currency and equity markets. While devaluation aids China in solving its economic problems, it concurrently has negative consequences elsewhere in the world.

For example, countries that sell commodities to China, such as Brazil and Australia, were already reeling from selling less volume to China. On top of this, they must now also cope with falling prices, in that a weaker yuan fosters a stronger U.S. dollar, which typically leads to lower commodity prices. In another example, Chinese goods will be less expensive in the U.S., but U.S. goods will be more expensive in China, so Chinese exports benefit at the expense of U.S exports.

China will likely get away with this one time, but if it becomes a trend (Bloomberg: “It will take a lot more than a [3.5] percent devaluation to jump-start sagging Chinese exports”), the outcome could be “a new and increasingly destabilizing skirmish in the ever-widening global currency war.” (Bloomberg) Therefore it should be no surprise that after the devaluation the U.S. warned China that it will be “troubling” if government manipulation determines exchange rates, rather than market forces.

Currency devaluation is not without risks. According to Business Insider, “The primary risk is that devaluation leads to capital flight, as investors withdraw their money from the country in expectation of further falls in the currency.” Capital flight is a threat “to the stability of China’s financial system.” Another risk pertains to the heavily “indebted state of China’s corporate sector. Devaluing the yuan makes the dollar- and euro-denominated debt these companies are holding more onerous,” possibly causing increased defaults.

A third risk is that other countries retaliate by devaluing their currencies, thus accelerating a currency war. “A country takes these kinds of risks only if it knows it’s in a precarious situation.” (Business Insider) Recent signs of such a situation, besides exports falling 8.3 percent in July, include Beijing pulling out all the stops to avert a full-blown stock market crash; manufacturing contracting in August for the sixth straight month; and oil demand falling 4.2 percent in July versus June.

The entity most challenged and most maligned by the foregoing is China’s leadership. Articles penned by CNBC and the New York Times, regarding how the government handled the stock market collapse and the currency devaluation, have stated that “the worry is … that the government is panicking,” citing “concerns about its ability to manage a slowdown,” claiming “China is totally desperate” and asserting that the devaluation is “screaming that China is in trouble.” This doesn’t exactly inspire confidence.

The core reality is that Beijing is attempting to cope with an ever-growing list of complex, interwoven economic problems … debt, stock market, manufacturing, exports and currency issues … laced with unintended consequences, and negotiating this minefield without setting off an economic explosion may be too much to expect. Oil demand could be a casualty, which has to be factored into oil price forecasts.