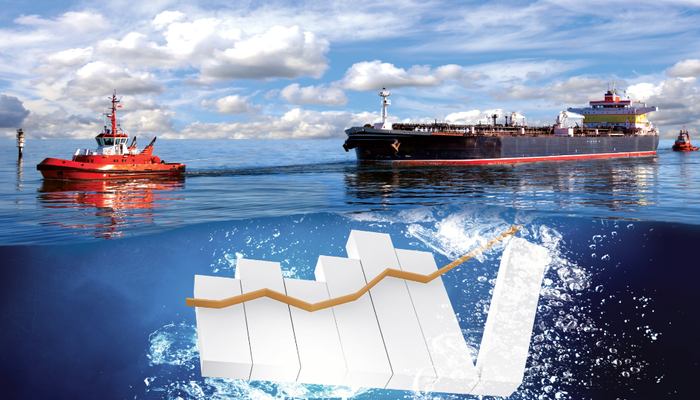 The coronavirus pandemic and nationwide lockdowns across the world caused a sharp drop in economic activity, which subsequently decreased demand for petroleum products and pushed refineries into production cuts. As physical demand for crude oil fell, oil storage facilities, both onshore and floating, were quickly filling up and U.S. crude oil inventories were getting close to reaching record highs. NYMEX WTI futures settled into negative territory for the first time in history on April 20, 2020. As this is now considered “the largest oil glut” that led to a historic drop in oil prices, I thought it would be interesting to look back at some of the major oil market crashes in history.

During 1979-1980 period, crude oil prices were rapidly increasing, and they reached a peak in April 1980 at over $35/bbl. Naturally, oil production increased and oil producing countries found themselves fighting for market share. High prices and rising output were followed by a reduction in demand as industrial processes and automobiles were becoming more energy efficient. In addition, economic activity in industrial countries slowed due to the 1970s financial crises, and in June 1981 The New York Times proclaimed that an “oil glut” had arrived. This oil glut was initially viewed as a temporary surplus, which later transformed into a six-year decline in oil prices. From 1982 to 1985, OPEC decreased oil production several times in order to stabilize prices, but these attempts failed as many OPEC members were producing above their quotas. Saudi Arabia was one of the few OPEC countries implementing output cuts, and soon non-OPEC countries surpassed OPEC in oil production levels. In 1986, Saudi Arabia grew tired of attempts to stabilize the market by curbing its output. In an about face, they opened the spigot, increasing production from 2mb/d to 5mb/d. This led crude oil prices to fall to almost $10/bbl in the first half of the year.

In August of 1990, Iraq invaded Kuwait, reviving an old territorial dispute, and claimed that Kuwait was stealing its oil via slant drilling. As a result of this occupation, the price of Brent crude oil jumped from $15/bbl at the end of July 1990 to $41.45/bbl in October. As oil production was slowing down in the Middle East due to tensions, and there was a potential risk to future oil supplies, the U.S. intervened and succeeded in removing Saddam Hussein’s Iraqi forces from Kuwait, calming the oil market. The day after the U.S. and allies launched an attack on Iraq, the oil price dropped 33% on January 21,1991 – the biggest daily decline at that time. The WTI oil price retreated back to same level as it had been on August 1, one day before Iraq invaded Kuwait. 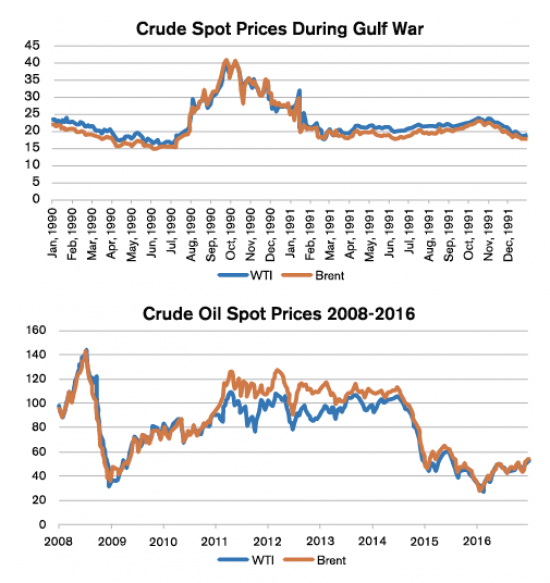 The most significant long-term surge in oil prices transpired between 2003 and 2008 when WTI prices climbed from $28/bbl to $134/bbl. The jump in prices developed primarily from increases in demand in developing economies such as China and India. Weakness in the U.S. dollar and geopolitical tensions added fuel to the fire. In March 2008, OPEC accused the U.S. of economic “mismanagement” that was pushing prices to record highs. In June 2008, an Israeli attack on Iran caused yet another huge spike in the oil price. The highest price ever recorded for crude oil came in July 2008 when WTI crude reached a price of $145.85/bbl. Soon after, the five-year price explosion ran its course when the global financial crises again drove down demand for crude oil just as additional supplies were ramping up. Prices plummeted over $100 per barrel to $32. What took five years to reach a crescendo was erased in less than six months.

Keeping in step with its penchant for volatility, world crude prices made another march upward to over $100/bbl; only this time it took less than two years to get there. But higher prices inspired many to look for oil in hard to get places. The shale revolution had begun. Fracking technology galvanized a black gold rush in unheard of places like Bakken, North Dakota. Meanwhile, the Canadians figured out how to get oil from sand in the backcountry of Alberta. The Saudis once again made the regrettable decision to attempt to run the oil cowboys off the reservation by pumping more oil and driving prices low enough to drive them out of business. Ingenuity would prevail. Shale producers became more and more efficient. U.S. production quickly broke records. It took less than two years for the price to plunge from $100 to $26.