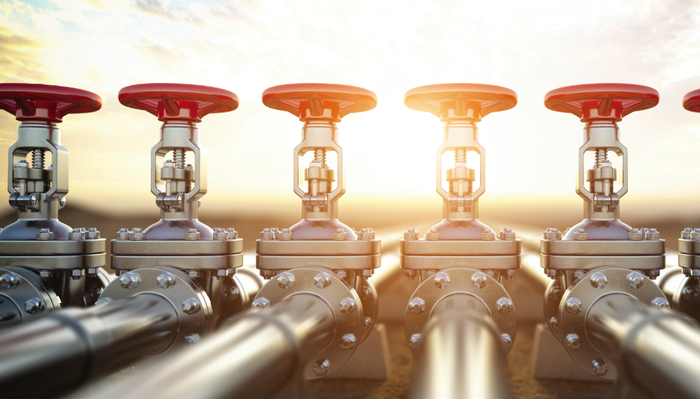 The OPEC+ record oil output cut agreement has been one of the most important events to influence oil prices this year. In this article, I’ll take a look at the brief history of OPEC and Russian cooperation, as well as how this latest deal came to be, its implications, and the future of the agreement.

In September 2016, Saudi Arabia (and OPEC) and Russia (and other non-OPEC allies) agreed to cooperate and signed a three-year pact in a bold attempt to get more control over oil prices. This group came to be known as OPEC+. Beginning in January of 2020, OPEC+ cut oil production by 2.1 mb/d, with Saudi Arabia contributing the most in these reductions. In early March, OPEC, less key “plus” member Russia, got together to review their agreement with the objective of extending their output cuts. They tentatively agreed to cut oil production by an additional 1.5 mb/d through the end of June 2020.

Several days later, Russia rejected the new pact, refusing to make additional oil production curbs, bringing an abrupt end to the nascent OPEC+ partnership. Saudi Arabia Crown Prince Mohammed bin Salman did not take the rejection lightly. Saudi Arabia cut their oil prices and started selling their crude oil at a discount to customers in Europe, Asia, and the U.S. Adding gasoline to the fire, the country announced that it would increase its oil production from 9.7 mb/d to 12.3 mb/d, exceeding its short-term production capacity, which was later expanded to 13 mb/d. Russia also increased its oil production, by 300,000 b/d. All this while a major pandemic spread around the globe, wreaking havoc on every major economy. Oil prices plummeted to levels unseen in 30 years. 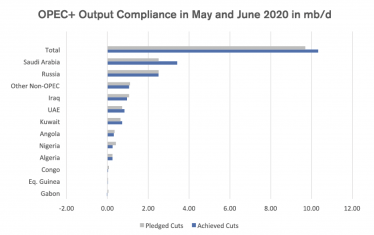 By April, after it was clear that U.S. oil companies would be decimated by the collapse in crude prices, President Trump intervened and called Mohammed bin Salman, threatening to withdraw U.S. military support if Saudi Arabia continued down this path. Though the timing was certainly conspicuous, it was likely the shocking demand destruction predicted in the wake of the pandemic that motivated the Saudis and Russia to a meeting of the minds.

On April 12, OPEC+, Russia, and others agreed on their biggest output cut ever. The group agreed to cut supply by 9.7 mb/d in May and June in order to support oil prices. The cutbacks were supposed to drop from 9.7 mb/d to 7.7 mb/d from July to December. As the pandemic spread to every corner of the earth and threatened unprecedented demand destruction, Saudi Arabia, the United Arab Emirates, and Kuwait agreed to voluntarily add additional output cuts of 1.18 mb/d – not part of the main deal. Subsequently, in early June, the OPEC+ group agreed to extend the record oil production cuts until the end of July.

One of the biggest challenges that OPEC has struggled with is compliance to output curbs by its members. Nigeria and Iraq, unwilling to stick to the quotas allocated to them, were asked to compensate with extra cuts from July to September. Production cuts, along with a significant drop in U.S. shale output, seem to be having some success. Crude oil prices have recovered significantly since their April lows, when WTI famously fell into negative territory and settled at -$37.63/bbl on April 20. 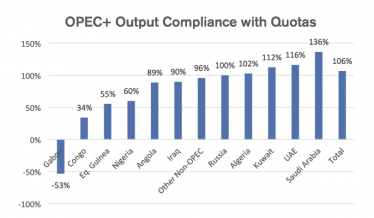 When the new OPEC+ agreement was signed, analysts were skeptical that the record oil output curbs were enough to rebalance the market. In the first month of the coronavirus pandemic, global oil demand dropped by about a third. However, in its June monthly report, the International Energy Agency (IEA) forecasted oil demand to fall by 8.1 mb/d in 2020, potentially the single largest drop in history. The IEA added in the same report that global oil supply had fallen by 11.8 mb/d in May and forecasted that 2020 global oil output would drop by 7.2 mb/d. Additionally, the 1.18 mb/d excess voluntary cuts by Saudi Arabia, Kuwait, and the UAE ended in June.

As of this writing, there were no indications that record output cuts could roll over into August. In fact, Abu Dhabi National Oil Company said that it plans to boost its oil exports in August, which was the first signal that OPEC and its allies were preparing to ease oil production cuts starting this month, although a final decision was yet to be made as of July 14. Meanwhile, Saudi Arabia and Russia are faced with the delicate balancing act of pushing up oil prices to meet their budget needs while trying not to drive prices too high, causing a resurgence of U.S. shale production.